The ASCE Wives Club of Fort Worth

Ms. Alice Nixon recently contacted me and related that her grandmother, Mrs. Sam A. Nixon, had been active in the “American Society of Civil Engineers’ Wives Club of Fort Worth, Texas”. She graciously sent a copy of a Yearbook for 1950-51 she found while going through some of her grandmother’s papers. This is a nice slice of history from an era that I’m sure predates the birth of most of our current members. (I have to admit that, being one year old in 1950, I was not aware of this organization.) 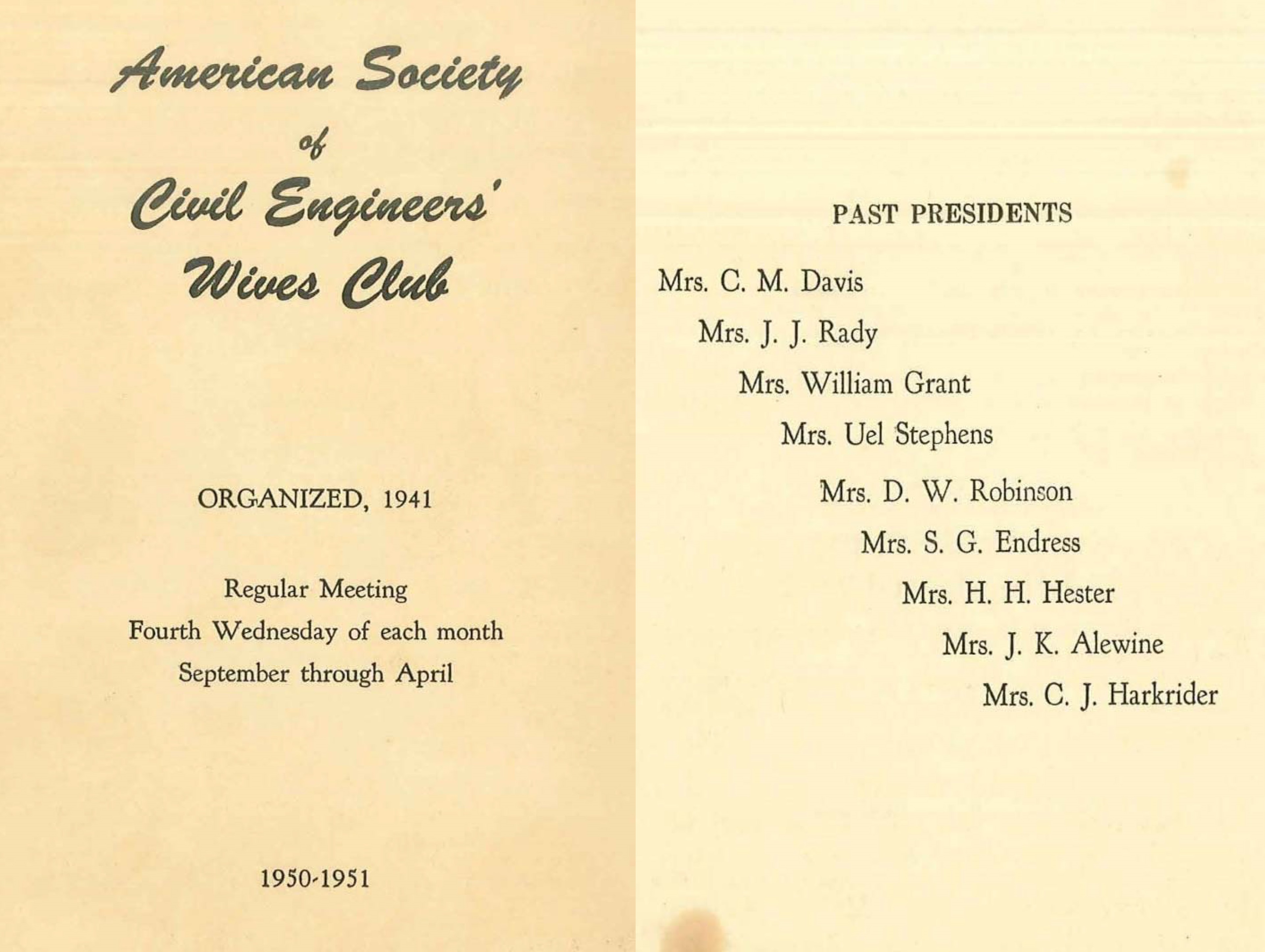 It is interesting to note in the names of Past Presidents so many prestigious civil engineers whose husbands are now legends in the development of the mid-20th century civil engineering profession in Texas. Additionally, in the roster can be found names of other leaders I recall from my early career like Bell, Buckley, Burgess, Freese, Geren, Hardy, Hendrick, Mapes, Nichols, and Thelin to name a few.

In perusing the eleven-page Yearbook it was interesting to note that telephone numbers, unlike our current 10-digit versions) consisted only of six digits. The first two digits formed an alphabetical prefix and only the last four digits were numerals (i.e. SU-5506 or WA-2554). And mailing addresses of the members lack a “zip code” (because those weren’t introduced until 1963).

The 1950-51 the yearbook revealed that The Wives Club had been organized in 1941 (the year the U.S. entered WWII). By 1950 the 52 members were served by seven (7) officers (Honorary President, President, Vice-President, Secretary, Treasurer, Parliamentarian and Historian). Nine (9) committees supported the activities (Programs, Telephone, Courtesy, Finance, Social, Yearbook, Membership, Publicity and Nominating).

Regular meetings were held monthly September through April. Every other month the meeting was devoted to “business” while a “program” was presented at meetings on the alternate months. December’s gathering was a Christmas party.

I’m not sure when the Wives Club ceased to be a functioning part of our ASCE Branch. Certainly many non-engineer wives still support their husbands in the engineering profession in many different ways. But today many women are involved with the Branch as professional engineers. The number of U.S. females earning Bachelors degrees in Engineering was probably close to 0% in the 1950’s. According to the Society of Women Engineers that increased to 0.8% in the early 1970’s and to 18.2% in 2010.

Lastly, the Yearbook also contained the Constitution and Bylaws of the Wives Club. I particularly liked the section of the Bylaws which called for annual membership dues of $1.00. (Maybe we should lobby for a return to the “good ole days” and suggest our officers investigate reinstituting $1.00 membership dues for our surviving organization!)